At the coast of southeastern Bali a silhouette of an archipelago dominates the horizon of the Indian Ocean. Many dwell on the seductive view from the shore but few take the time to discover it for real. We went on a weekend trip to the island of Nusa Lembongan – and came back a week later.

The article has been published in the Danish travel magazine “ Vagabond”, January 2015 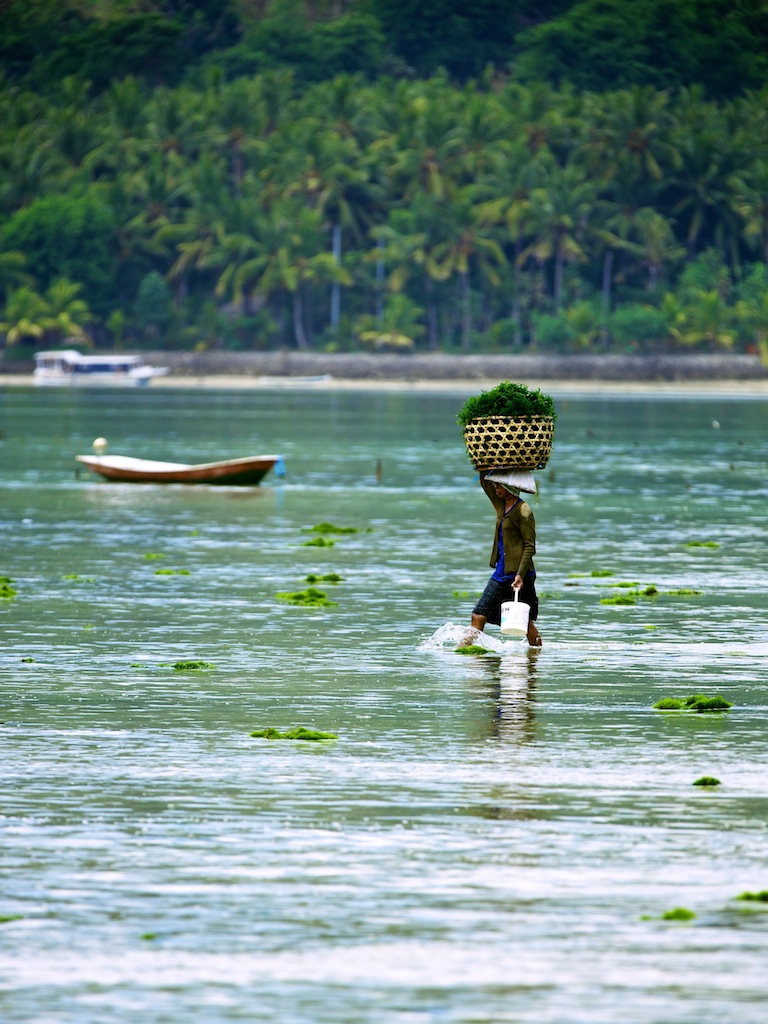 The speedboat turns off the engine and slowly slides between the numerous traditional outrigger boats moored by the sandy beach. It’s half an hour since we sailed from one of Bali’s busy tourist magnets namely the beach town of Sanur. And it is a distinctly different view that welcomes us here.

The beach is almost empty from humans and under the turquoise blue water, green fields of seaweed silently wavers, contrasting the white sand bed, resembling a form of underwater patchwork. An elderly woman is walking in the water while balancing a braided basket on her head. It is filled with harvest of seaweed. She cautiously stops and straightens the sarong, which is firmly adhering her body. She continues towards a small cabin made of straws.

The scene has an enchanting effect and for a moment produces the magic feeling of being dumped into a time pocket. We have arrived at the city of Jungutbatu on Nusa Lembongan – a small unspoiled island of eight km2, which Lonely Planet describes as “the Bali you dream about but never finds”.

We jump from the boat to the load of an open pickup truck. The speedometer dances in burst between 20 and 30 kilometers per hour as we bump through the city and drive into the tropical forest through a narrow, steep and pothole filled road. 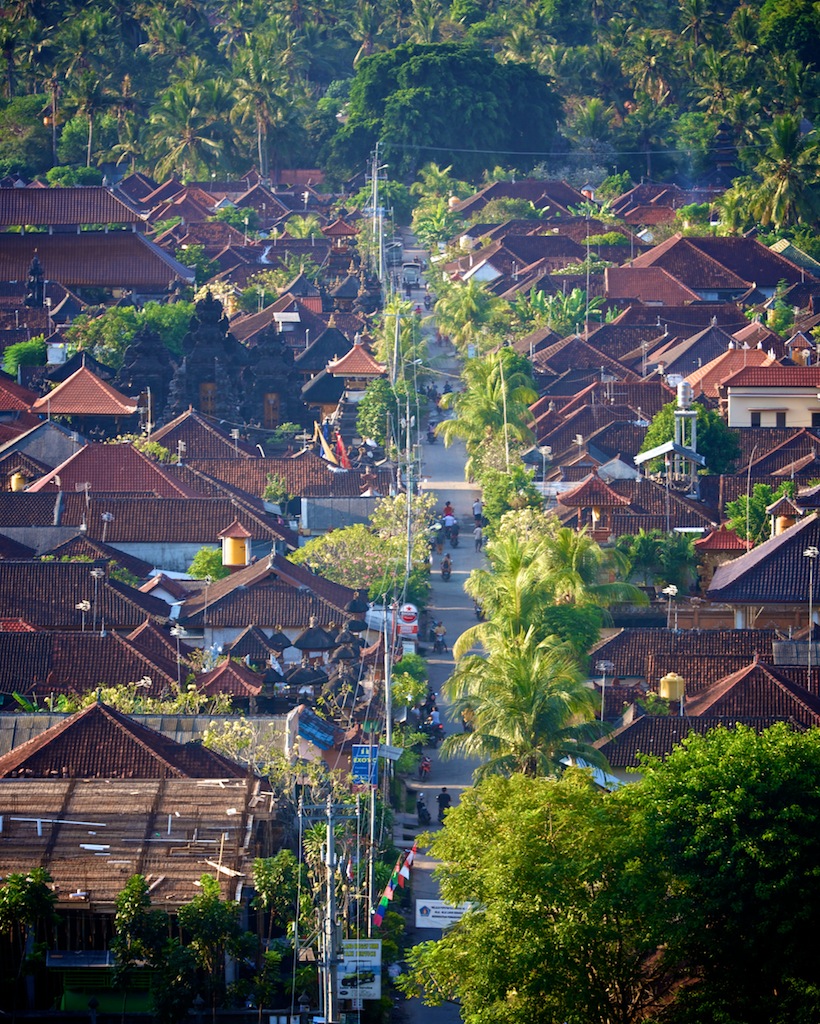 “WOW!” my husband Martin exclaims as the exhausted pickup truck brings us to the top of the wavering landscape of mountains. Contrary to the lushness of the coast and large areas of mangrove forest the highlands are harsher. Up here desolate areas rules between wild-grown trees, shrubs and cacti. But in the midst of the pristine nature an impressive panorama is revealed beyond the northern coast of the island – superlatives get in line!

A view of boats resembling small chess pieces floating in the clear blue water across the fields of seaweed. The narrow main street of the city runs through a collage of palms, tiled rooftops and temples seducing the eye towards the main attraction of the view: the 3142-meter-high Agung volcano, which thrives majestic behind the backdrop of Bali.

Ten minutes – and at least 253 potholes – later we arrive at Twin Island Villas. Our home for the weekend. And the place is worth all the bumps! A small stone staircase leads down the hillside where three thatched pool villas are distributed on small plateaus embraced in an oasis of green vegetation. And wherever you stand, sit or lie, you have the most beautiful views of the canal, which runs between Lembongan and the smaller neighboring island, Ceningan – and acts as a megaphone for the daily symphony orchestra of bird watching and Hindu ceremonies.

We are warmly welcomed by BJ – one of the five staff members who ensure that guests have a carefree stay. “We make you lazy” he kindly laughs as he introduces Ketut, who is in the kitchen, and Nyoman behind the bar. The exotic surroundings emit so much peace and hospitality that the weekend passes unnoticed. Completely like the graceful haze that hangs over the canal every morning as the sun climbs the sky and bathe our little private tropical paradise in a glowing orange light.

We are not ready to leave this place. The Travel Guides promise of an authentic local environment, exotic beaches, great surfing and colorful coral reefs with a myriad of exotic fish is captivating us. We book the villa for five more days.

The waves smash against the raw rocky coast and spray the water with the force of a geyser several meters into the air. It drops heavily into the gorge and throws a cascade of drizzle over us. The experience causes momentary confusion. Because it feels like we are in the middle of the wildest storm. But a few minutes ago we were frying in the sun on the golden sandy beach with the unsubtle but suitable name – Dream Beach – just a few hundred meters from here. We get thrilling sensation in the stomach every time the waves hit the cliffs, and understand why the locals have named the place Devil’s tears.

Involuntarily wet, we go back to our rented scooters and set course for the mark that Nyoman has drawn on a small map of the island. He has invited us to a big passion of his: Cockfight. As visitors of the island it is impossible to not notice that the ancient tradition is very popular. The spectacle of crazy roosters constantly plays like an island-soundtrack and our curiosity to experience the oldest spectator sport in the world has made us accept the kind invitation.

The tour goes through Lembongan Village – the other of the total of two towns, which is the epitome of the charming and sleepy local life. Through the scent of incense and low hanging laundry in narrow alleys. In between stray chickens and lazy dogs sleeping in the middle of the road. Past ancient Hindu temples and playful children with colorful kites. And above all – seaweed drying in the sun a long the road.

The noise of crazy cocks and shouts from the audience is all-embracing as we arrive at the covered arena. The forest of waving arms holding cash in the hand is blocking the view from the action. The first bet is happening.

“Mette!” I suddenly hear someone calling my name and see Nyoman’s face light up in the crowd. He eagerly signals me and makes room on the bench where he is sitting. Our new seat have a direct view of two men preparing the cocks for battle by strapping a ten centimeter long knife blade on the left leg of the cock. It looks grotesque, but to my left Nyoman expresses nothing but excitement. The bird dies after a few minutes; he explains when he discovers my anxious facial expressions. To him cockfight is downright the same as fishing and hunting.

Actually cockfights have been illegal in Indonesia since 1981 but are permitted in connection with religious ceremonies where the blood of the birds is a sacrifice to calm the evil spirits. Today’s imminent cockfights are part of a full moon ritual at the largest temple of the island. 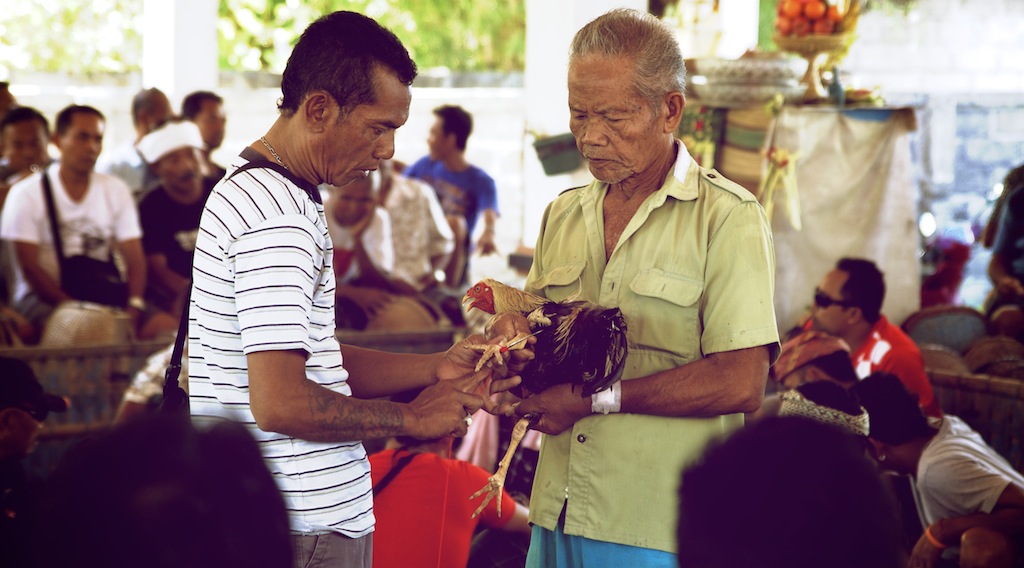 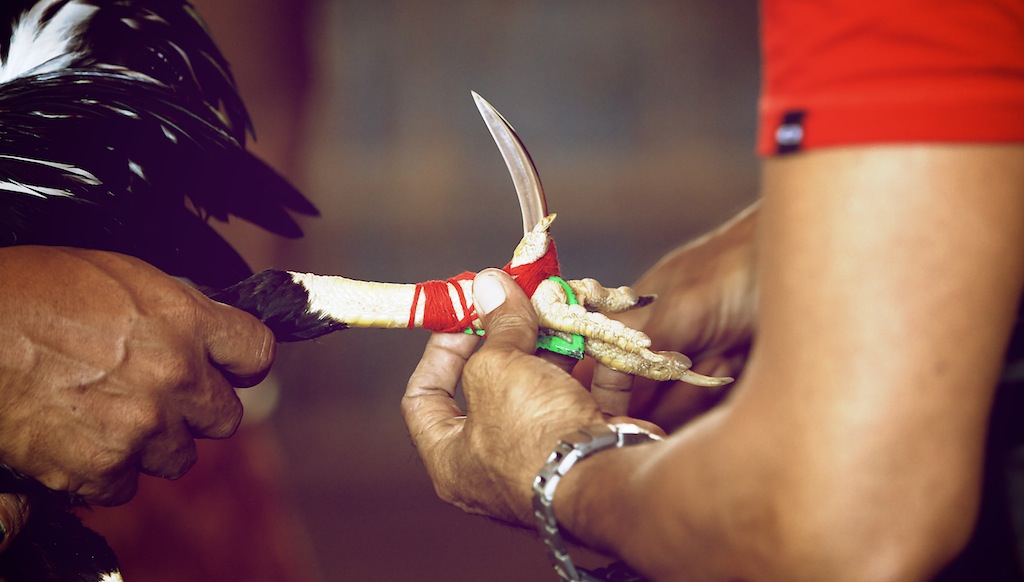 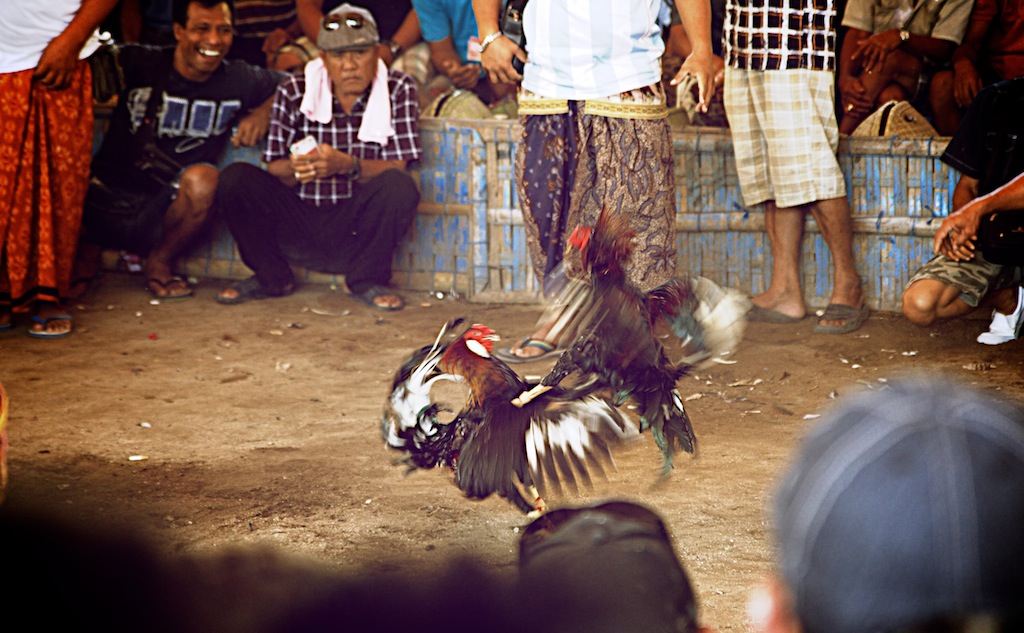 Inside the ring two cocks attack each other. They jump into the air with flapping wings while attempting to plunge the mounted knife into each other.  Flying feathers are filling the area. The audience shouts. The birds are trying to catch their breath. Shouts exhausted. The atmosphere is at a boiling point. The spectacle is both repulsive and fascinating. And a few seconds later it’s all over. One bird drops to the dirt with blood spilling from its beak. “Chicken soup” Nyoman replies when I ask about its further destiny? The winner gets the dead bird, the money and – most importantly: the glory.

GIANTS OF THE SEA

However, water sports are the biggest attraction of Lembongan. But the currents are challenging so you have to be an experienced surfer to ride the best waves or an experienced diver to visit the reefs where the rare and huge Mola mola resides.

As we board the boat owned by Pingky – the brother-in-law of BJ, we are carrying snorkels, masks, fins and the dream of swimming with Manta rays. On the southern side of the island you can experience the gliding giants all year around as they swim to low water to be cleansed by the smaller fish of the reef. Unfortunately the ocean is too upset today Pingky apologetically explains while trying to encourage us to find some other big fish.

The first two stops are an underground train station of small and busy tropical fish. Due to the seaweed farming the locals are not dependent on fishing for an income, which is clearly visible on the hoards of colorful fish.

“They do not bite” Pingky says as we jump in to the water for the third time. “What?” I say, just before I put the mask on my head and submerge – looking directly into the side of a really big and dark blue fish. Around me a swarm of equally big fish roars the waters. Unbelievable – and with such speed. I cannot see Martin. Something smooth hits my leg. I spit frightened and paddle back in the style of a swimming dog. “What is THAT ?!” I shout. “Big fish” Pingky shouts from the safety of the boat while excitedly pointing towards me. And with an almost cinematic timing I see a little fish disappear into the mouth of the big fish.

Back on the boat we can happily laugh at our first encounter with one of the larger predators of the coral reef – the Bluefin trevalle – and no it did not bit us. Tomorrow, it’s time to go back home – a less funny fact.  All we can think of is: When can we come back? Because once you’ve found eight km2 of true paradise it’s incredibly hard to leave it.

Nusa Lembongan is one of three islands located 12 kilometers from the southeast coast of Bali – Nusa Penida is the largest and Nusa Ceningan is the smallest. Of the three islands, Lembongan is the one who is furthest in the development of a relaxing holiday paradise. And the increased tourism flow of this island has assured a 24/7 supply of electricity.

Cockfight has been around for centuries in the Balinese Hindu culture where men of all ranks in life spend a fortune breeding the fighting birds, caring for them, training them and feeding them with reinforcing compound feed. Animal welfare associations claim cruelty but to the locals it’s a respectable martial art. Cockfight enthusiasts fight to protect the tradition from greedy gamblers who are known to apply poison to the knife blades, pump the cocks with steroids and spray them with painkillers just before a fight. Which is considered cheating – much like fishing with dynamite.

Since the 1980s, the vast majority of locals have ensured themselves by cultivating seaweed. It takes 30 days from the poke to be sown until it is harvested – by hand. The seaweed is dried in the sun before it is sold and exported to the USA, Japan and Europe to be used for cosmetics, food and medicine. A family owns 3-5 hectares of seaweed fields and can reap up to 1000 kg a month. It gives an income of approx. 550 USD, which is substantially higher than the average salary of the Balinese population of approx. 100 USD.