It’s like stepping into a time pocket as you move around in Zanzibar’s old town. Stone Town is a melting pot of cultures, busy markets, Arab palaces and labyrinth streets where hundreds of years of history comes to live. Here you will find our tips for what you can experience in the city.

When I wrote the introduction to this guide, I was wondering if I would ever finish it. For every time I wrote something, I deleted it all over again. I simply could not find the words to briefly describe our impression of Stone Town.

I could not make it short. Because I would like to tell you about all of it – about the atmosphere, the places, the population and the story. About the colorful Swahili culture, oriental architecture and the fragrant markets. About Sultans, Slaves and seafarers. And about the feeling of moving from the golden sandy beach into the heart of the city where a bygone era is still to be found.

So now I’ve changed my strategy. Instead of trying to turn a full-bodied fascination down to a few tight sentences, I just want to point this out:

And I hope our mini-guide can be a stepping-stone for you to feel the same. 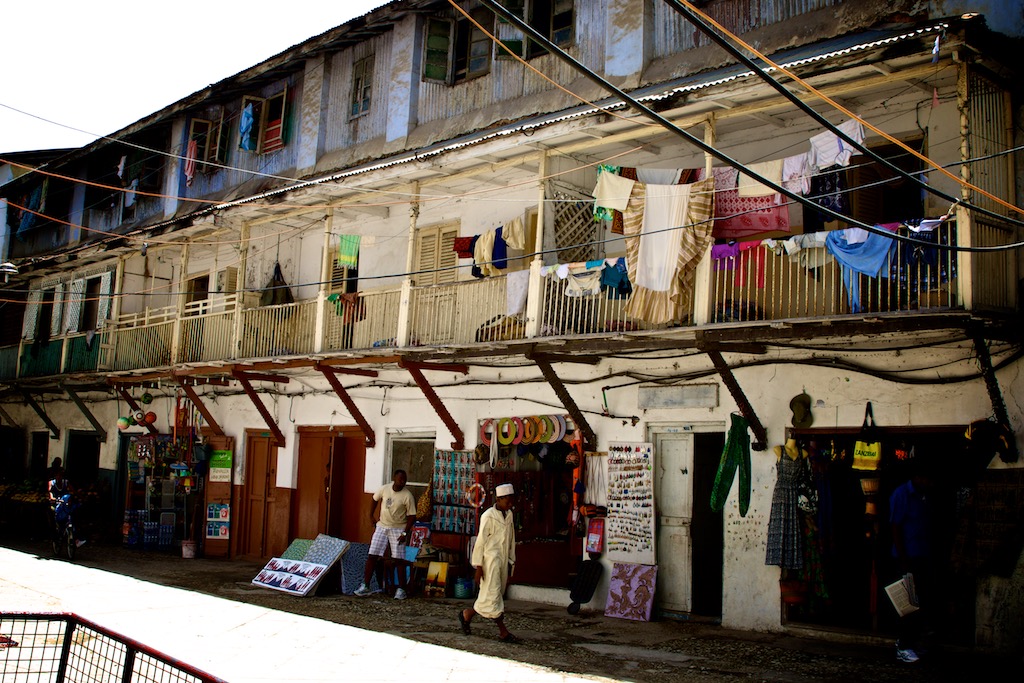 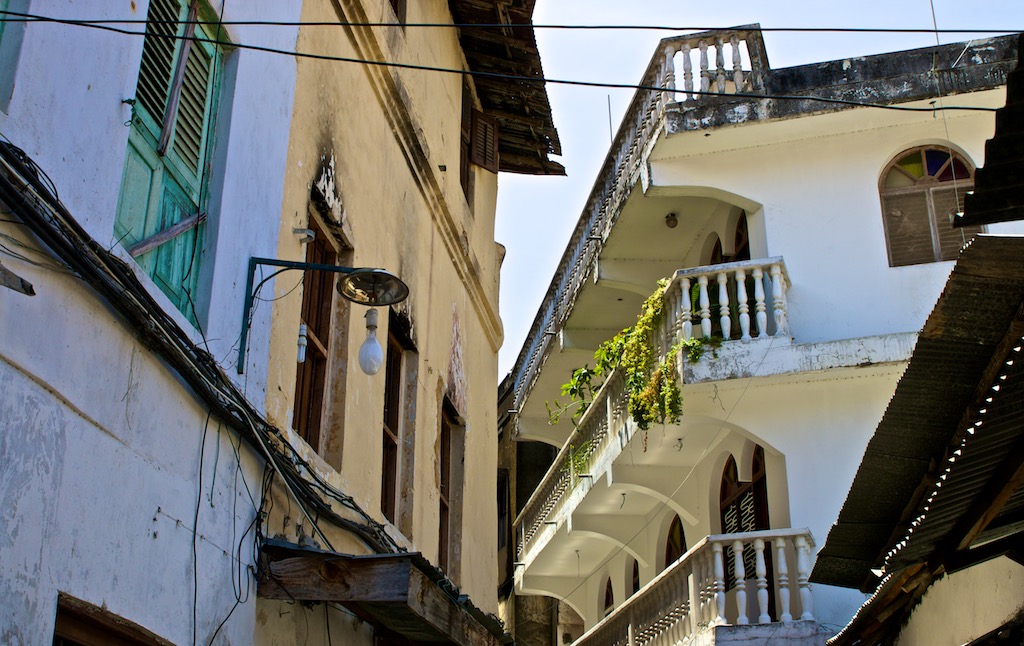 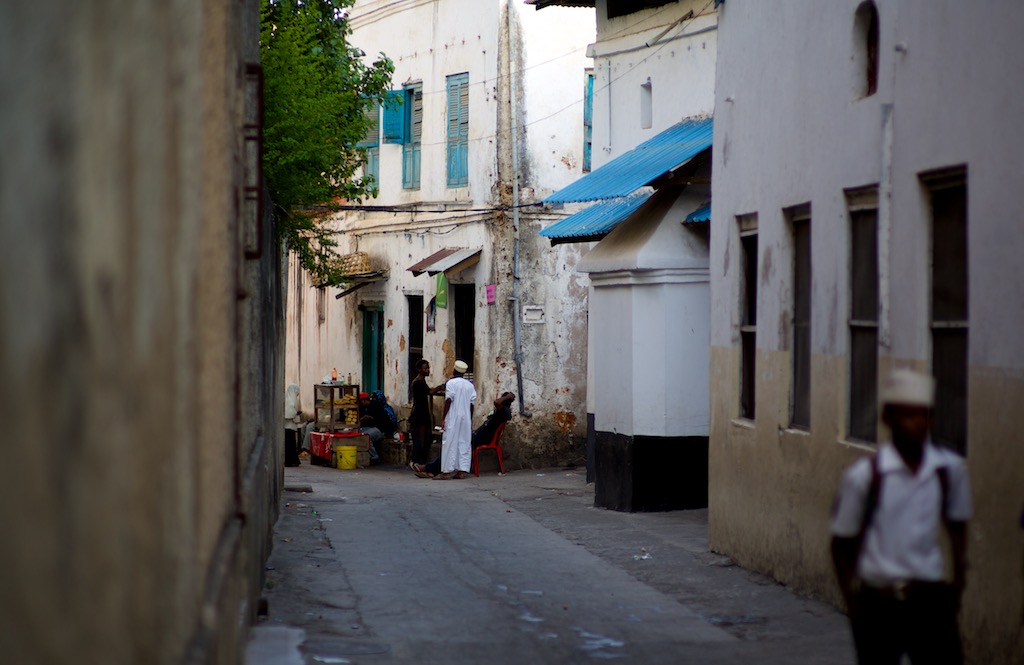 Throughout the centuries Zanzibar was a significant hub for African, Persian, Arab, Indian and European seafarers as they sailed along the East African coast. With them, they brought things and traditions, which made Zanzibar’s old city an exciting melting pot of cultures, architecture and religion.

To the naked eye Stone Town is not exactly a well-preserved city. On the other hand, that’s exactly what makes the city a truly unique experience – and why it has come on UNESCO’s list of world heritage. Time has set its clear marks and the decayed buildings tell a dramatic story of the time when Arabian Sultans ruled, Oriental traders spun gold on slaves, ivory and spices, and European explorers used the island as a starting point for expeditions into the dark heart of Africa. 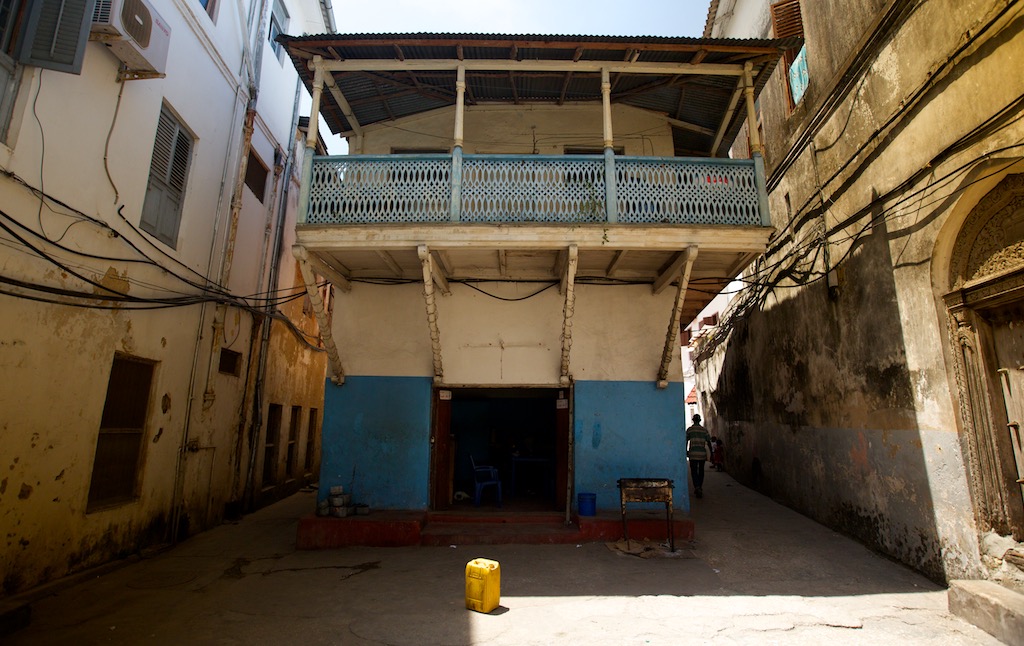 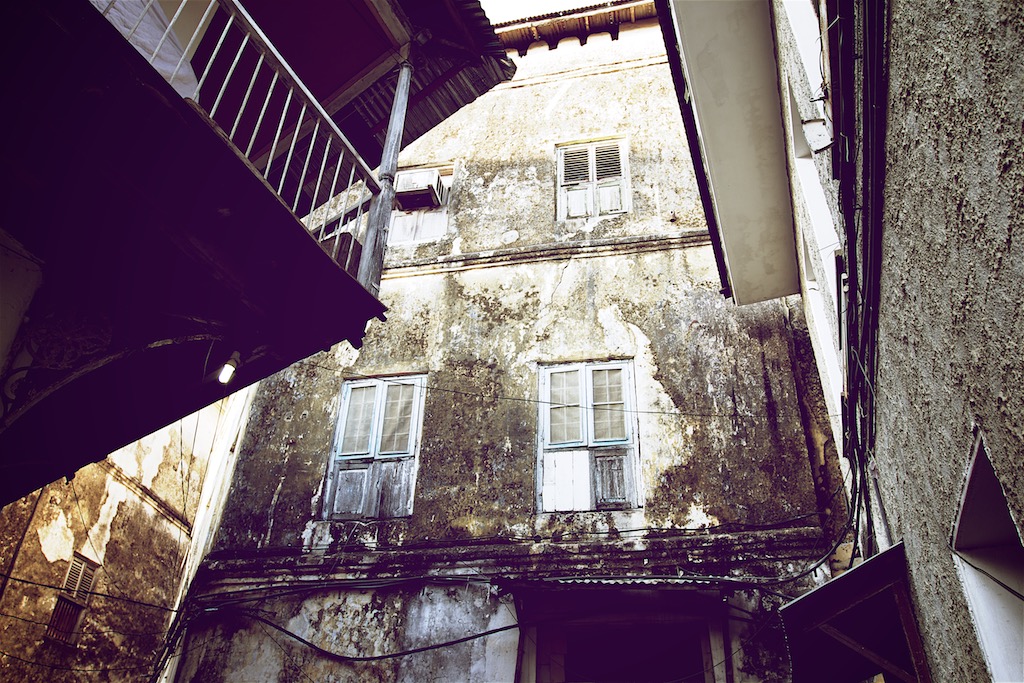 7 THINGS TO EXPERIENCE IN STONE TOWN

Start by treating yourselves to a whole day of getting voluntarily lost in Stone Town’s narrow, narrow streets. In addition to constantly discovering charming squares (‘Jaws Corner’ is one of the most famous), small shops and atmospheric alleys, the wreck of old buildings is a fascinating combination of Arab shapes, Indian ornamental and European colonial style – and many are Decorated with beautiful carved wooden doors and magnificent balconies. The city is no bigger than you can walk through it in a couple of hours – so take the time to explore.

TIP: Start the day at the Forodhani Park, which is located between the coast and the ancient fort on Mizingani Road. See location on city map HERE. From here you can walk along the water and to the big harbor before the sun rises, including four of the city’s most significant historical buildings – the House of Wonders, the Ngome Kongwe Fort, the Old Dispensary and the Palace Museum. As it gets warmer, you can appropriately continue into the shady, narrow streets and move further into Stone Town’s vibrant heart. And when the sun starts to set – see point 7. 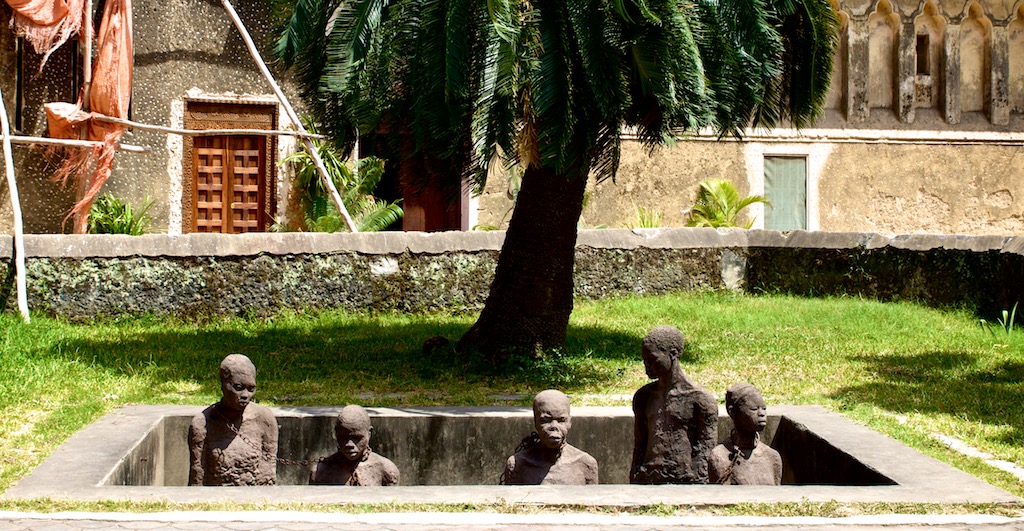 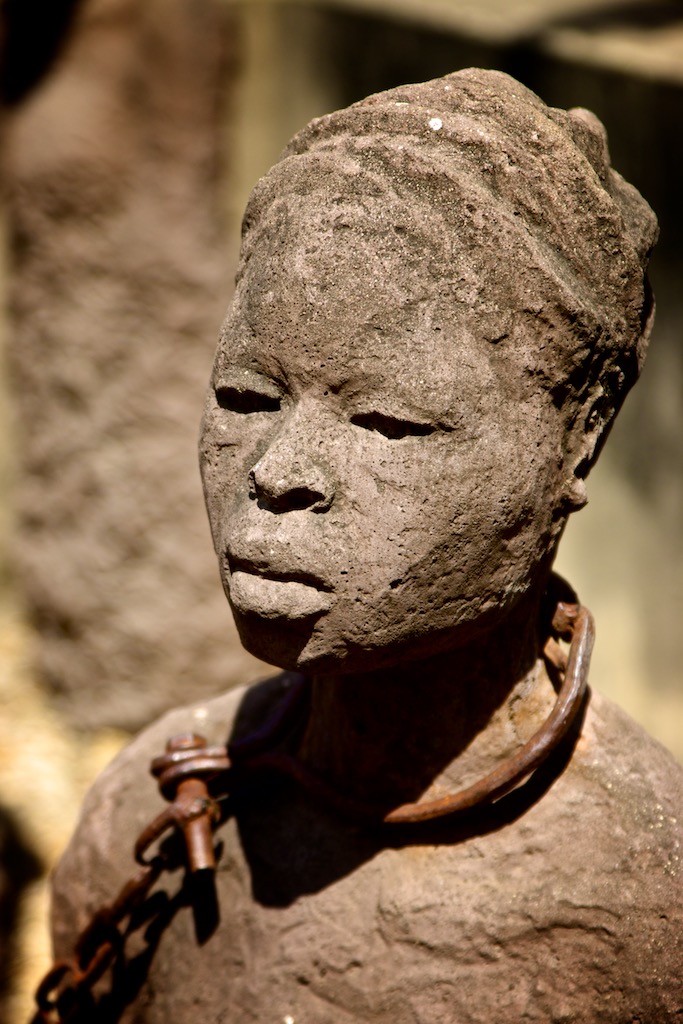 Zanzibar’s past as East Africa’s largest slave market hangs like a shadow across the postcard-beautiful island. Even though the locals prefer to forget about this dark chapter of history, it is impossible not to be affected by the fact that over 50,000 Africans were sold annually as slaves as the trade was at its highest in the 1800s. Today, there are only few but gloomy traces of horror, which lasted until the early 1900s.

The slave market itself was closed in 1873 after which an Anglican cathedral was built on the ground. Therefore, you cannot see the place itself, but the altar of the cathedral marks the place where the slaves were bound and whipped to blood, and outside stands a monument in memory of the lost lives. The monument consists of five slaves standing in a deep hole with original iron chains around their necks.

TIP: You will find the cathedral at Mkunazini Road – and in the neighboring building, which currently houses St. Monica’s Hostel, you can visit the dungeons where the slaves were stowed together without food and drinks for several days before being sold at auction. See location on city map HERE. 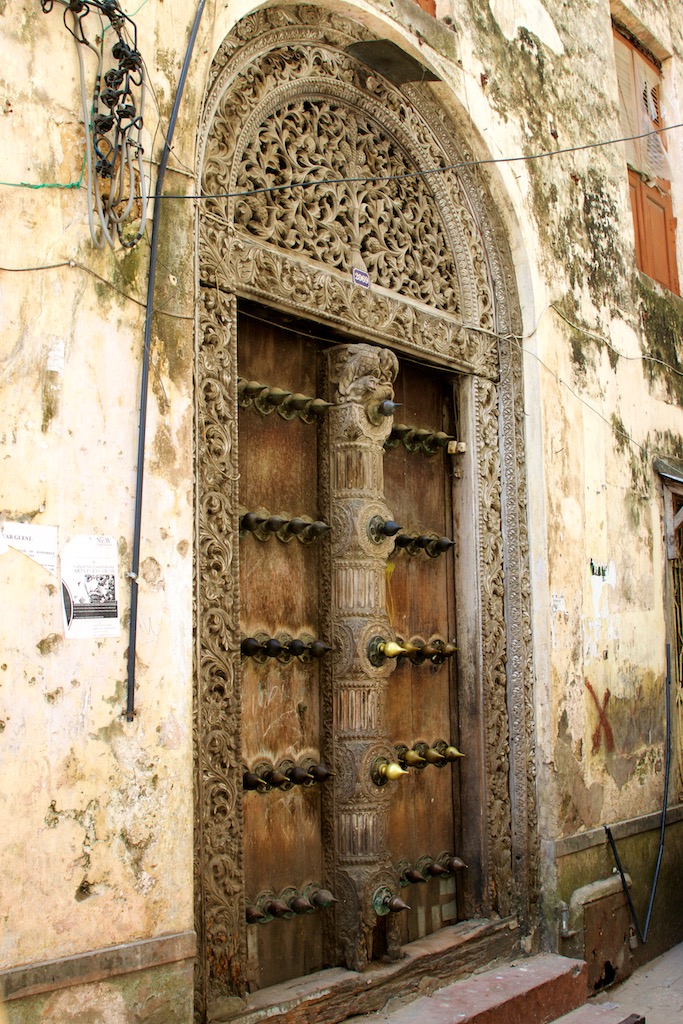 If you have seen pictures from Stone Town you have no doubt seen pictures of big, solid wooden doors with masterfully carved details. The doors are a traditional part of the Zanzibar architectural style and each tells their own story. The handmade carvings, words and symbols, testify to the financial status, hometown and employment of the owner of the house.

Traditionally, the door is actually the first to be made when the Zanzibar builders build a house. The greater the prosperity and social status of the family, the bigger and more elaborately the wooden front door will be.

There are two main types of doors; An Indian known for its square shutters, and an Arabic, which often has inscriptions from the Holy Koran and a richly decorated frieze. Some doors are also decorated with pointed brass knobs to prevent elephants from smashing the entrance. But since there have never been elephants on Zanzibar, it is believed that the decoration is inspired by India and instead used to reflect the wealth of the owner.

TIP: Today there are about 500 original doors left in the city, many of which are older than the house itself. The oldest wooden door you will find on the ancient fortress, Ngome Kongwe Fort, and one of the most famous ones sits on the former slave dealer Tippu Tips House, located on the street with the killing name ‘Suicide Alley’ *.

(* According to our guide, the story tells us that the street got its name as Tippu Tip was hugely fond of firearms. To test their forces, he asked slaves to run down the street while shooting at them.)

Whether you prefer to eat the traditional Zanzibar traditional dishes with your fingers, or prefer to put knife and fork into recognizable dishes from international cuisine, you will find many good dining experiences on Zanzibar.  According to rumor, the island’s culinary scene has flourished in recent years and has become an exciting destination for real foodies. We have therefore made this special guide to: Stone Town’s best restaurants. 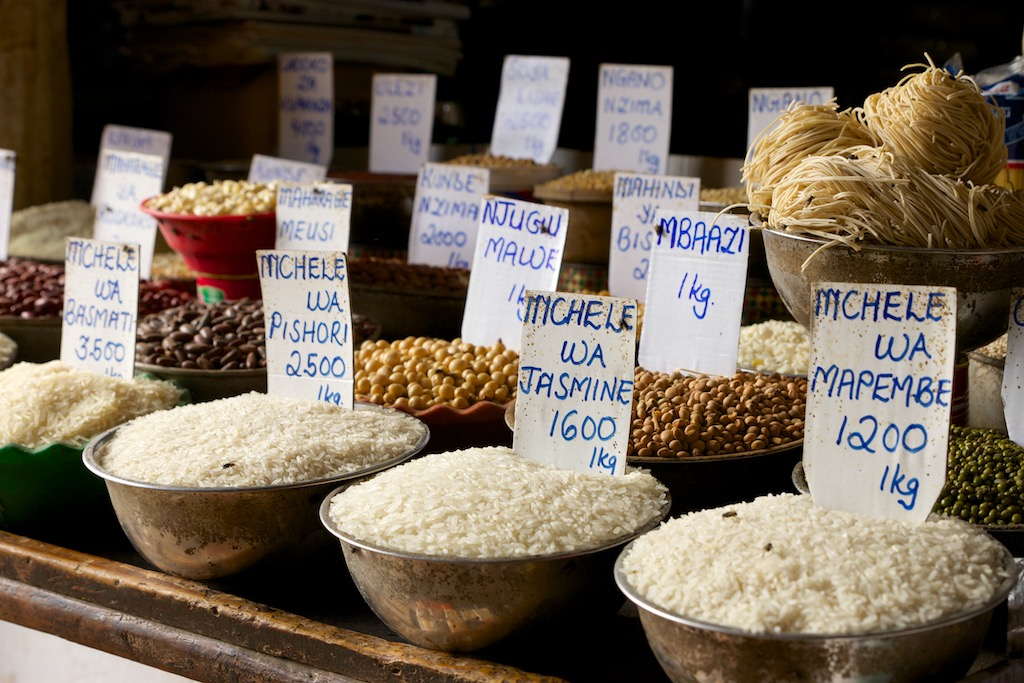 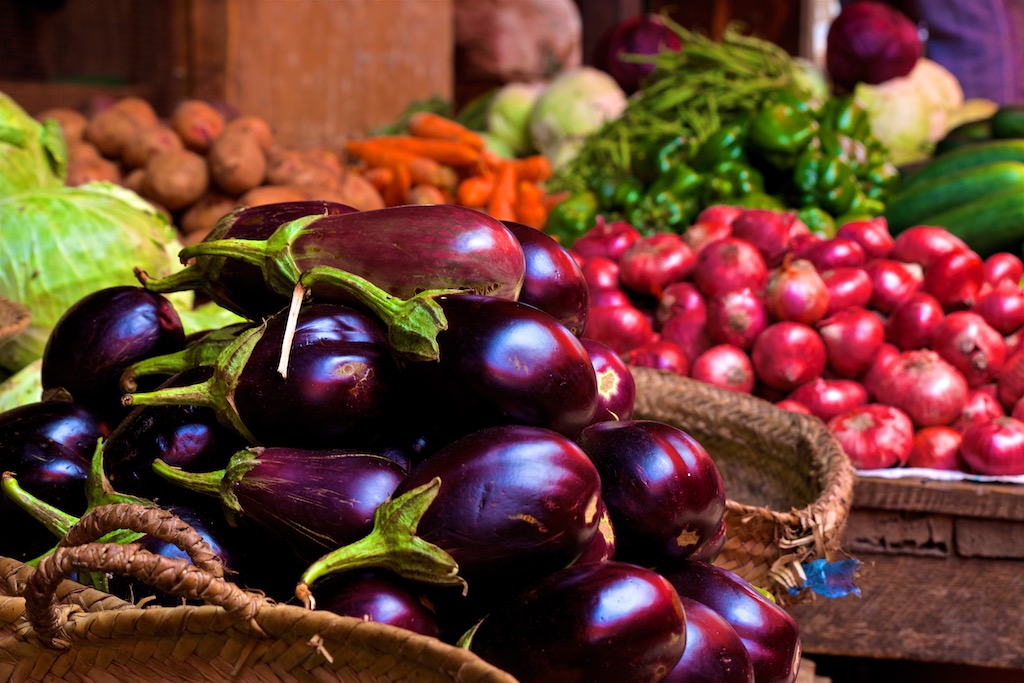 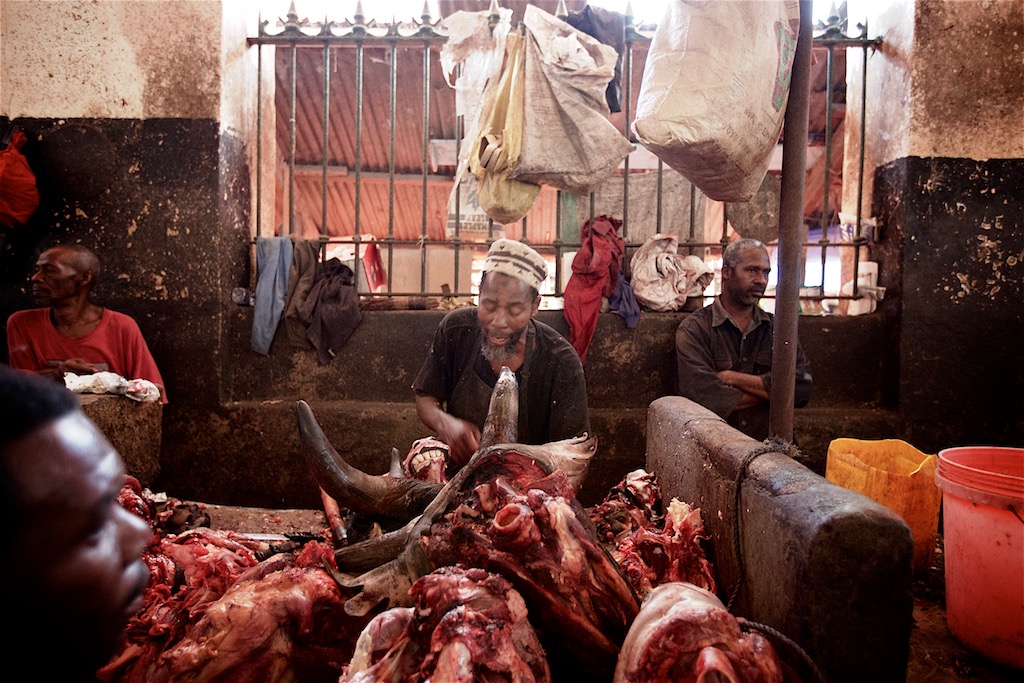 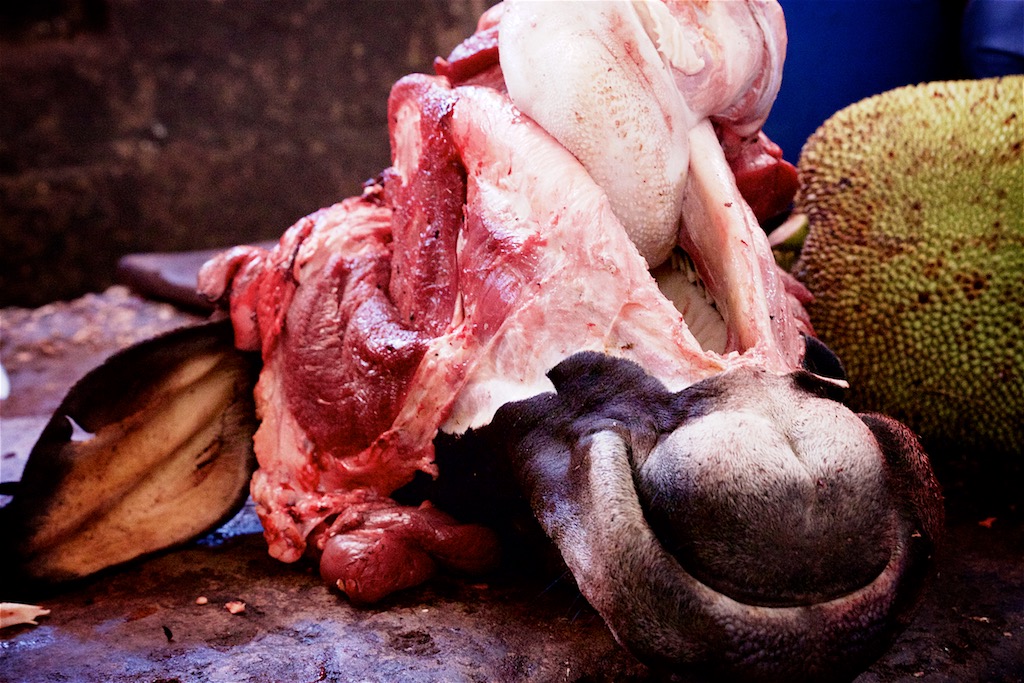 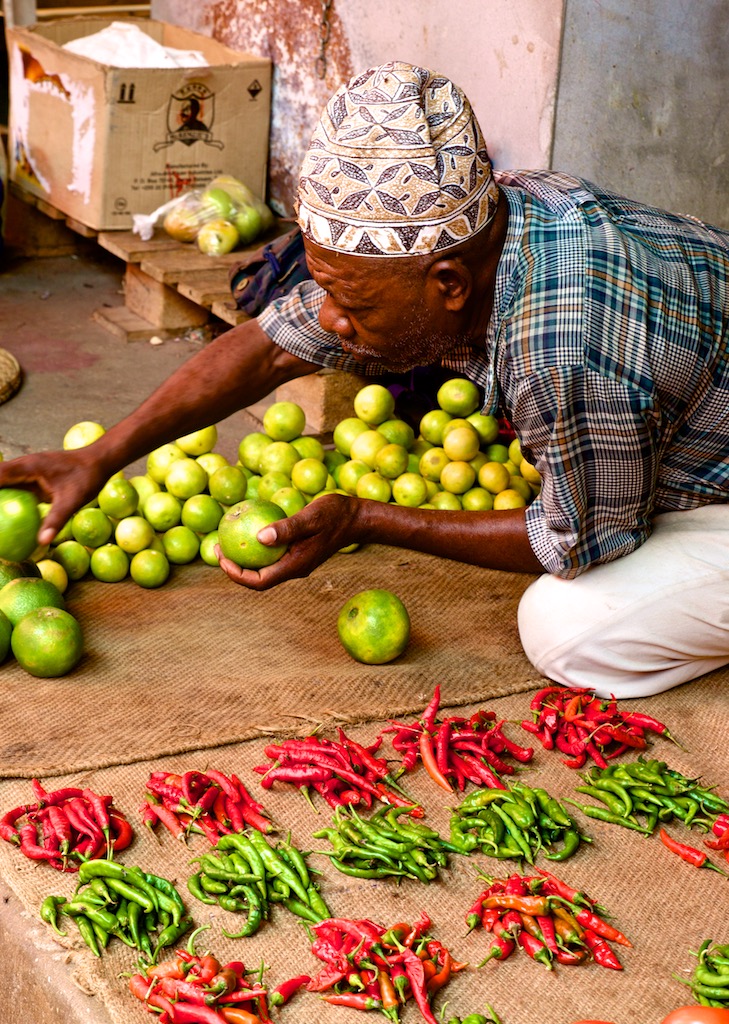 If you want to experience true Zanzibar, visit the city’s largest and oldest market, Darajani. Here, the locals sell and buy everything from fruit to cell phones, and a trip through the market is a fascinating jumble of people and bombardment of colors and indistinguishable fragrances.

In the main buildings you will find the butchers that splits cow heads and pours bloody guts into bowls, as well as fishmongers who cleans the day’s catch on the table and cuts the heads of the largest fish on the floor – while in a small adjacent building you can point out a living chicken, which you can have slaughtered and picked two go. Outside you will find a labyrinth of stalls with fruit, vegetables and spices.

TIP: Visit the market early in the day before it gets overrun and too hot, and while the stalls are still filled with fresh produce. The market is on Benjamin Mkapa Road, formerly called Creek Road. See location on city map HERE. 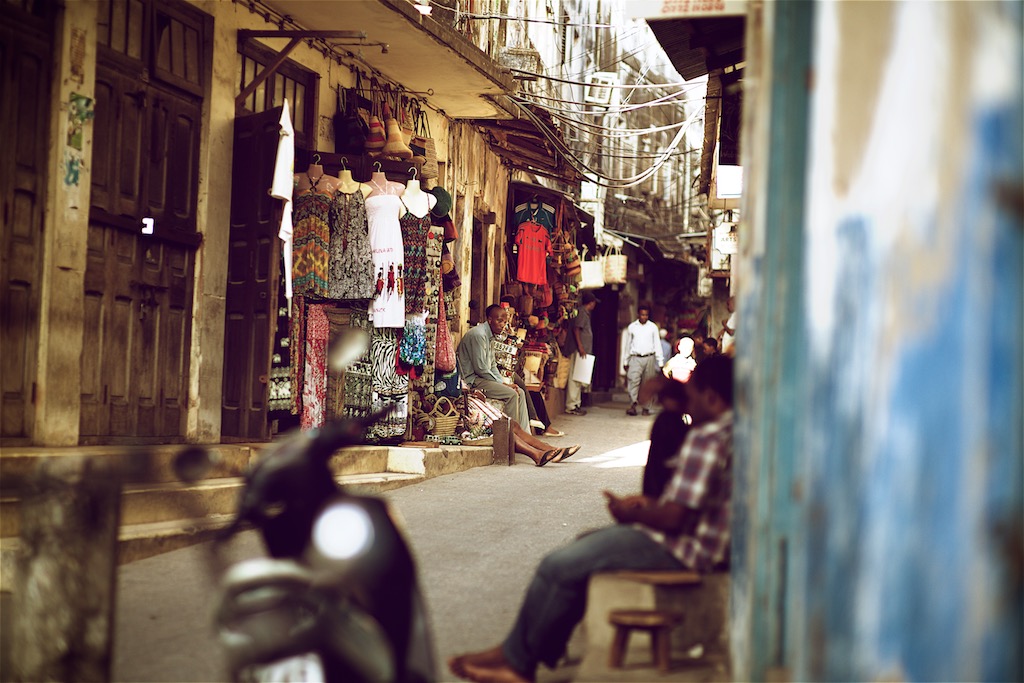 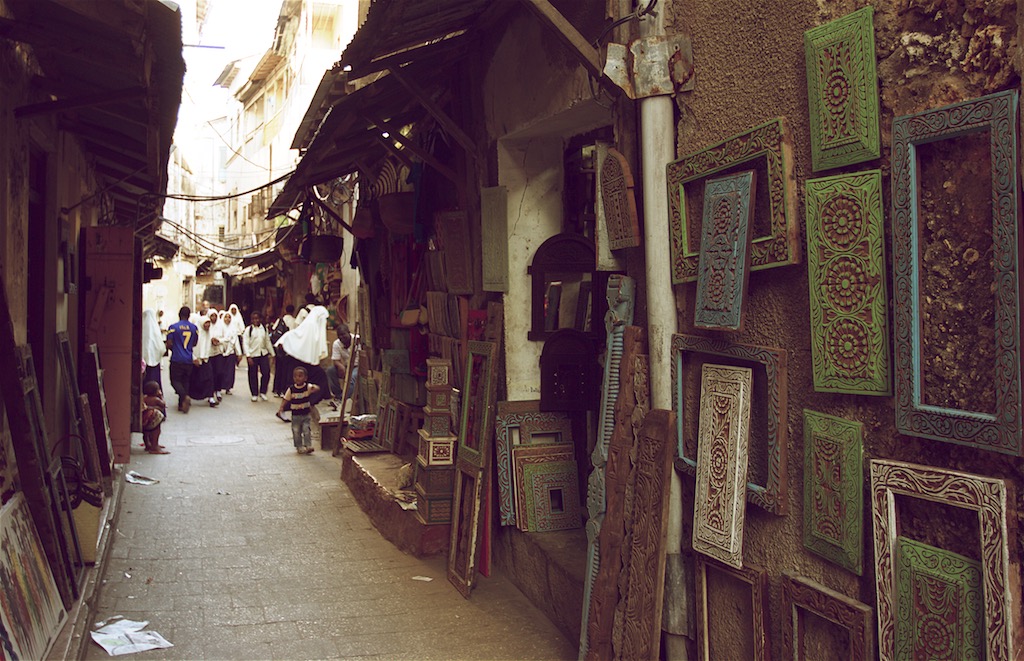 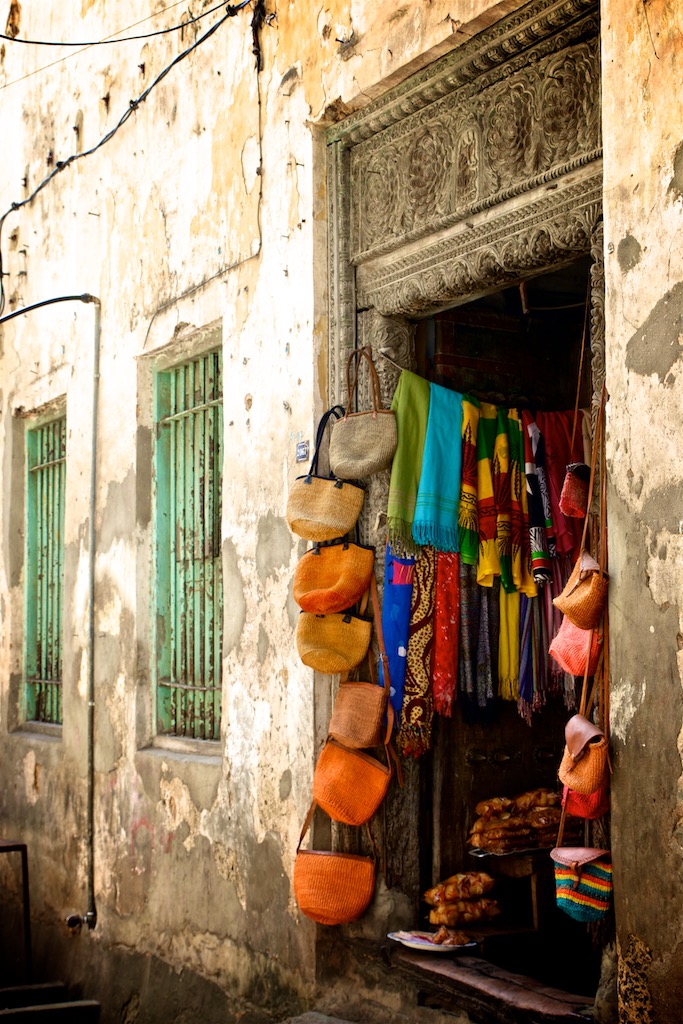 Stone Town is like an Aladdin’s cave, if you like to shop for special things. Everywhere you can find small bazaars with everything from cheap sandals, colorful harem pants and fun souvenirs to carved wooden figures, handmade jewelry and African music CDs.

TIP: The slightly nicer and more expensive stores are located on Kenyatta Road, but if you want to make a cheap trade, start on Gizenga Street and follow the network of small streets that are also among the city’s most vibrant. See location on city map HERE.

Zanzibar is world-renowned for its pastel-colored sunsets, and in Stone Town, the beach becomes the center of an atmospheric vivacity, as the tropical heat gets cooler during the day. The kids are at the water’s edge, young men practice acrobatic skills in the sand, fishermen hang out at the pier and friends meet to eat in the Forodhani Park.

TIP: The best view of the city is from the roof terrace at The Africa House Hotel, which overlooks the water. And with a bar serving refreshing drinks for all visitors, the hotel has the perfect setting to enjoy today’s last beautiful sunbeams. 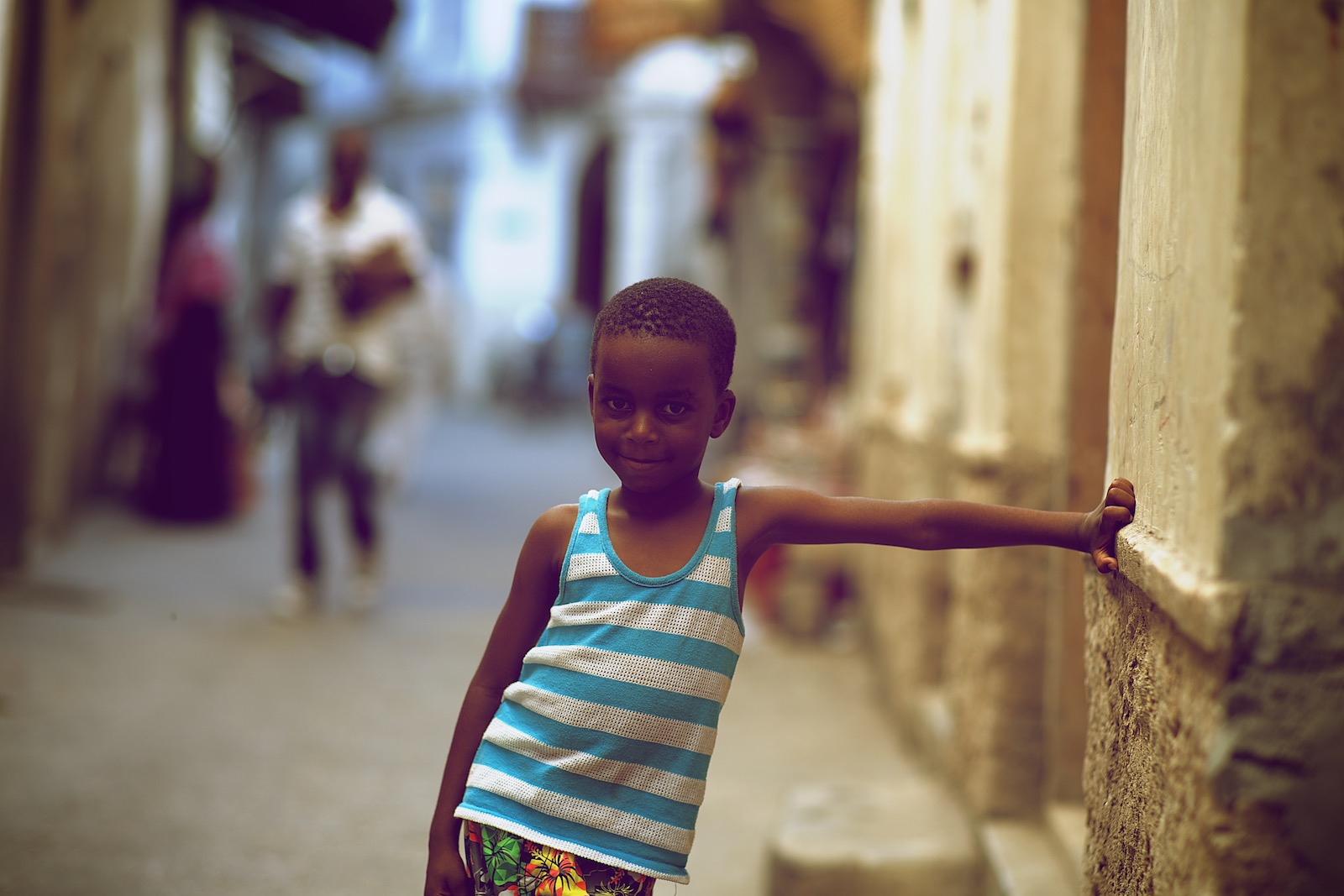 HOW TO FIND STONE TOWN

Stone Town is the name of the ancient Arab district, which today is part of the island’s largest city, Zanzibar City. The district is located on the western coast of Zanzibar, folding its labyrinthian streets between the Indian Ocean and the Benjamin Mkapa Road, which is both the physical and visible border between the Old Town and the newer Zanzibar City.

The guide is based on an article featured in Vagabond Travel Magazine.

Please write us if you think our tips were useful or if there is something you’re missing – then we’ll be happy to return with follow-up info. We are also very pleased to hear from you who have visited Stone Town and can add a few more helpful tips. Please share comments in box below. Bon voyage, M & M